The greatest jewels sacred in Cambodia are raised in idyllic backwaters through the jungle. They are temples shrouded in mystery that trap the traveler for their uniqueness and beauty. From the archaeological site of Angkor to the ancient city of Sambor Prei Kuk, here is a guide to delve into the main epicenters of Cambodian spirituality. 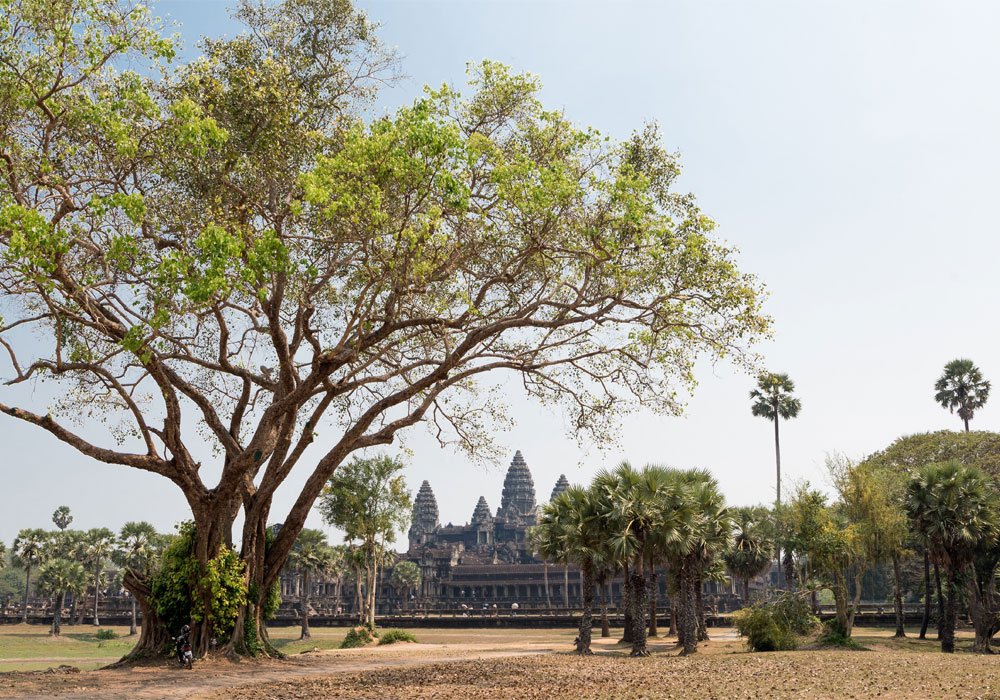 It is one of the most spectacular temples in Cambodia and its stamp has become an icon of the country. Settled in the Angkor Archaeological Park in Siem Reap, it was built in the 12th century as a Hindu temple, but later became a place of worship for Buddhists. Immersed in the 400 square kilometers of the park, Angkor Wat aims to symbolize the universe and it rises dotted with beautiful galleries, patios, porches and balustrades, all of them equipped with bas-reliefs and highly attractive details. An explosion of beauty and overwhelming magnitude, which can be visited from 5:00 am to witness the sunrise between Apsaras (nymphs) and characters from Hindu mythology. 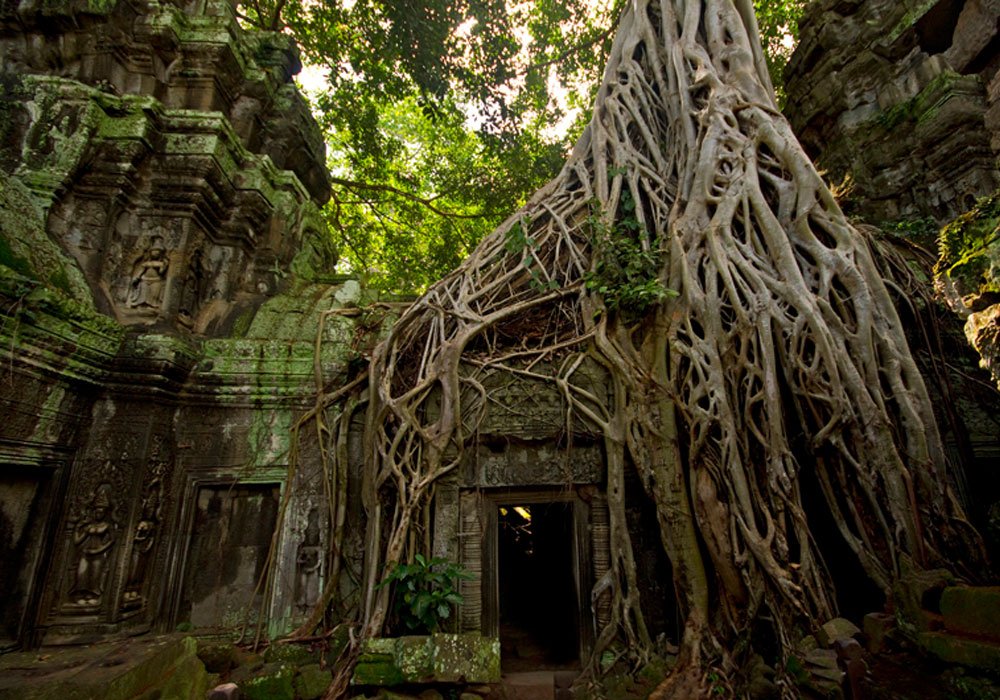 Also located within the archaeological site of Angkor, it is not possible the most famous temple, but it can boast of having been part of the seventh art since some of the most significant scenes of the film Lara Croft: Tomb Raider was shot here. This temple was built by Khmer King Jayavarman VII  in honor of his mother and characterized by being covered with trees, where giant roots are twisted between sandstone structures. It’s truly unique amongst the Angkor Complex. 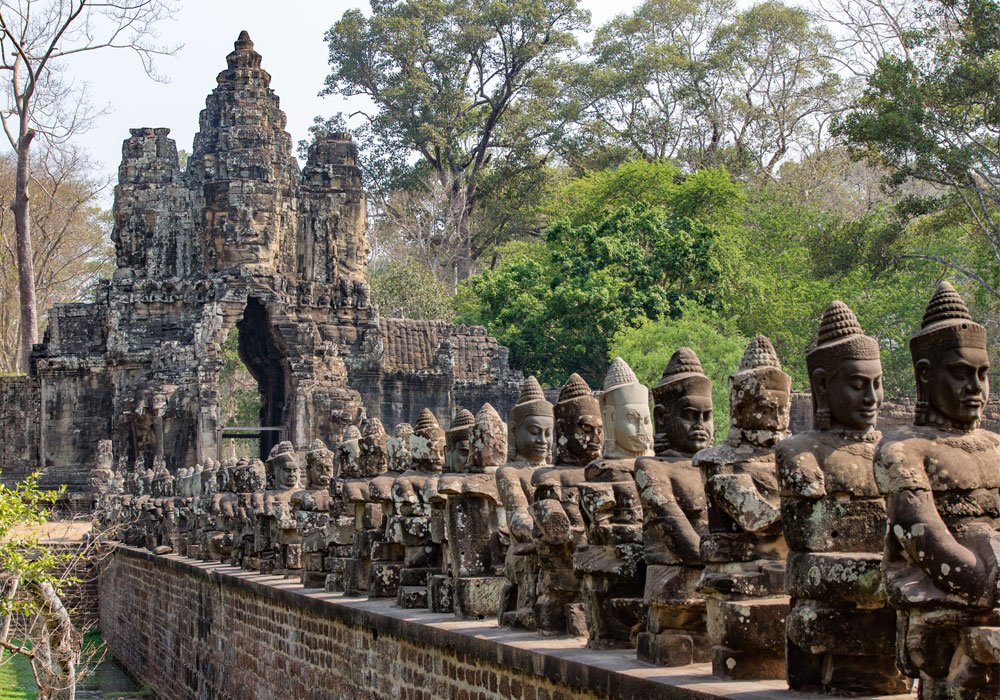 It is the great attraction present in the Angkor Archaeological Park (along with Angkor Wat and Ta Prohm). Its name already indicates it “great city”, the last great capital of the Khmer Empire. It is a walled city, in which a large number of temples are housed, including the enigmatic Bayon Temple, with its huge stone faces looking into eternity. Drawing an almost perfect square plan, the city is surrounded by a wall 8 meters high and 12 kilometers long, with five gates (two on the east side), flanked by statues of gods and demons which are the best prelude to an interior enclosure that, in addition to the Bayon temple, includes that of Baphuon or that of Preah Palilay, and among others. 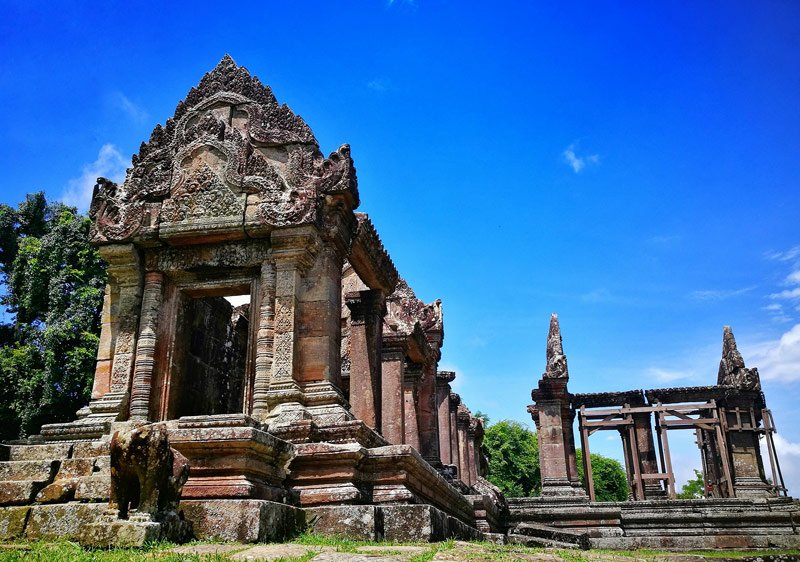 About 240 kilometers to the north of Siem Reap, this temple remote dedicated to the Hindu deity Shiva is located on the top of a cliff in the Dangrek mountains, north of the country. Built during the Khmer Empire, in the first half of the 11th century, this epicenter of the spiritual life of the empire underwent transformations with the arrival of successive kings and evolution with a mixture of various architectural styles. Spectacular views, an attractive setting and exceptional architectural quality are attributes that are well worth a trip to the Thai border itself to visit this great enclave declared in the 2008 World Heritage of Humanity by Unesco. But it is not the only one, since in the area there are other complexes, submerged in the jungle and unrelated to tourism, as is the case of Prasat Preah Khan. Behind a monumental staircase, Prasat Preah Vihear has five entrance buildings known as gopuras that provide access to courtyards and more remote areas of the temple. All this along 800 meters in length that reward the visitor with panoramic views of the Cambodian plains. 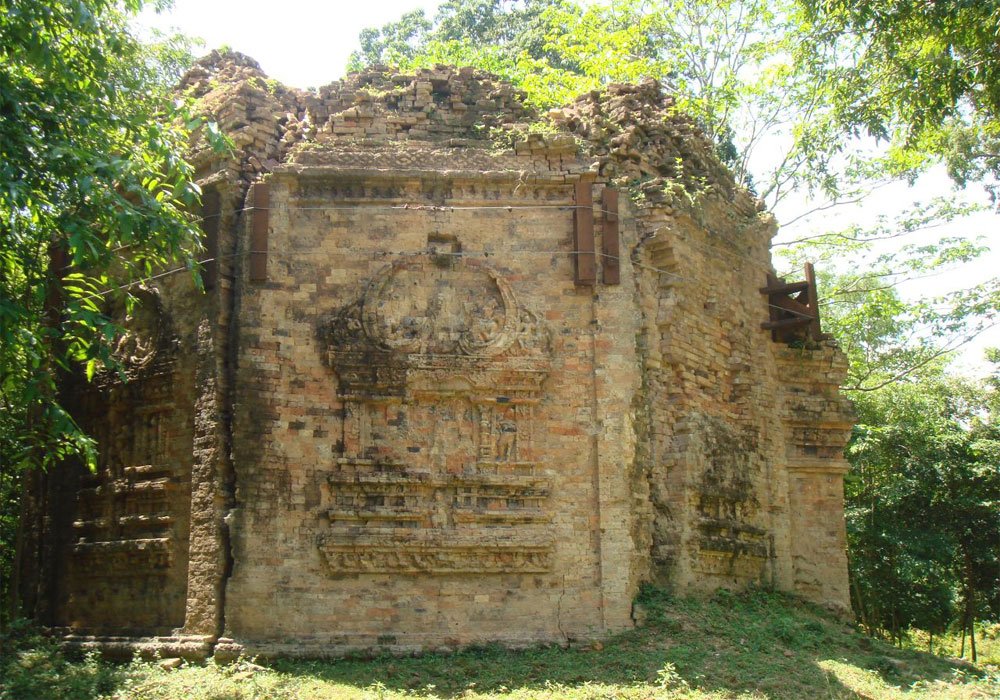 What was the capital of the Kingdom of Chenla in the 6th century, under the reign of Isanavarman I, It is today a large complex covered in ivy and tree roots, recently declared by Unesco as the third World Heritage site of the country. You can see more than a hundred pre-Angkorian temples, made of brick, with an octagonal base and steep pyramid-shaped roofs. Located about 100 miles east of Siem Reap, the quiet and serene complex features three main groups of temples ( Prasat Tao, Prasat Yeay Pau, and Prasat Sambor) accessed via comfortable forest trails. 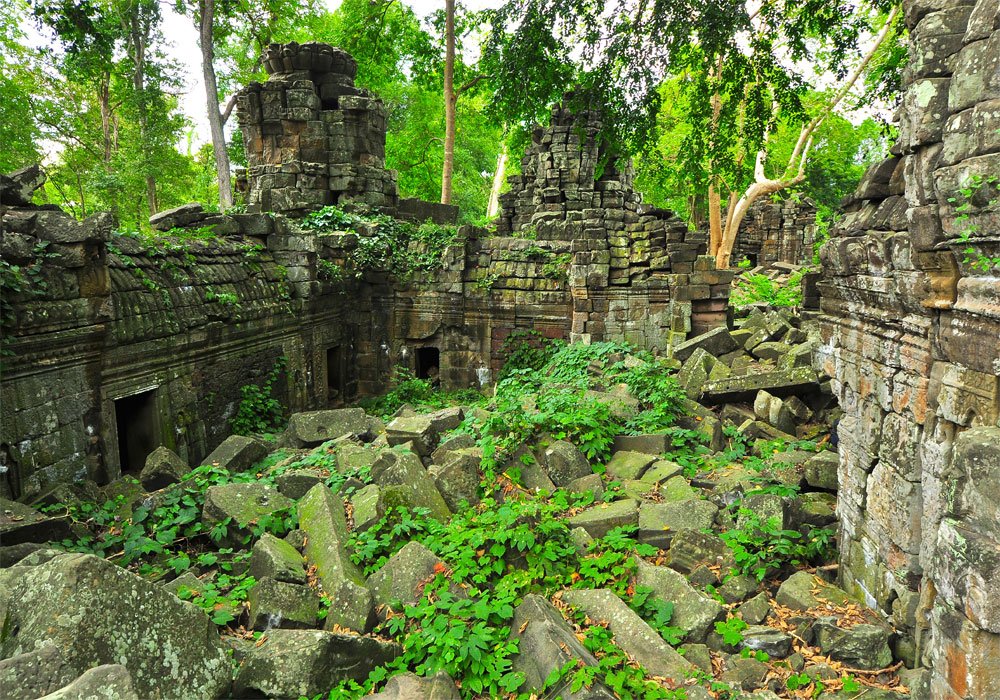 In the middle of the jungle foliage, this complex built in the 12th century by the Khmer king Jayavarman VII and located about 170 kilometers north of Siem Reap, It is composed of three main temples and nine satellites, all of them very close to each other. The enclosure features stone towers adorned with faces that draw enigmatic smiles and impressive intricate bas-reliefs that tell stories of war and religion. Abandoned for more than 800 years, and a victim after several looting, it currently enjoys an interesting community tourism program, ideal for those who wish to venture fully into rural Cambodian life.and enjoy an enigmatic environment in peace and serenity.